Industrial components manufacturers face challenges in achieving highly demanding results under adverse working conditions. When machines are either idle or under operation, grime can build up with the accumulation of condensation or vapors. This makes it problematic when calculating the position of a machine’s axes, extending start-up times for equipment and reducing the efficiency of the production processes. 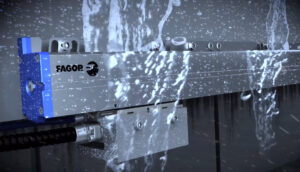 In response, the machine automation and control systems manufacturer Fagor Automation has developed 3STATECH, an optoelectronic technology that will be showcased at the upcoming EMO Hannover machine tool trade show, one of the most important events for the industrial manufacturing sector in Europe.

This solution, incorporated in the most advanced range of linear feedback encoders, contributes to strengthening production equipment without any loss of precision.

Linear feedback encoders are the devices that make calculations and provide information on a tool’s exact position, meaning machining operations can be performed properly. Using the solutions presented before the 3STATECH technology, the encoder’s reader head extracted information from the code engraved on the substrate using opaque and transparent lines that allowed light to pass through or to blocking it, thus generating the typical binary logic states. However, these systems did not have the capacity to correctly identify other aspects such as dirt or grime. This meant reduced performance when working under adverse conditions, for example when there are vapors and condensation. 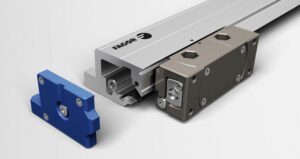 “The addition of the 3STATECH proprietary technology embedded in our linear encoders is an evolutionary step away from the basic binary system, since it includes a third state that can identify contamination in the measurement standard. Because of this feature, linear encoders have become even more durable, which can now position themselves with precision over and over again, even under difficult working environments”, explained Jose Mari Viniegra, Sales Manager of Fagor Automation Feedback Business.

This solution, which has already been patented, improves optical reading, performs an accurate calculation of a tool’s position while requiring less information to do so, and offers greater resistance to the build up of condensation caused by the combination of temperature and humidity inside a machine. Also, the development offers even greater protection against chemical agents used during machining processes, such as lubricants, coolants and cutting oils.

Specifically, this solution has been incorporated into centerless and horizontal grinders for highly demanding manufacturing and strong dynamic requirements of the machine tool and advanced production systems company, Danobat.

Also, the company from Elgoibar had been searching for a high performance product that could ensure the geometric requirements demanded by its customers and that could offer greater robustness when working under extreme conditions, such as the exposure to liquids and vapors produced during the machining process.

One of the main benefits of 3STATECH for Danobat’s grinders has been its capacity to operate under very demanding environments.

Apart from improvements made to performance, this technology can also offer improvements to machine design, since this greater robustness can optimize the location of a feedback system, providing improved overall performances for the machine as a whole.

Committed to innovating a range of encoders

Along with its three-state logic solution, 3STATECH, Fagor Automation will also present its new Series 3 of linear encoders at EMO Hannover. 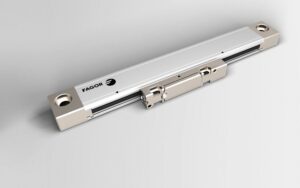 “In our drive for continuous developments, we have incorporated improvements into our new encoders, based on the experience gained from the previous series, and other new innovative features have also been implemented. These modifications and innovations affect all technologies found within an encoder, including their mechanics, optoelectronics and software,” explained Oscar Fernandez, Marketing Manager of Fagor Automation Feedback Business.

Specifically, with regard to the new S3 series, the Basque manufacturer has made improvements to their mechanical aspects, such as the size of the reader head, which is now smaller, so that the space required to house the linear encoder is also smaller.

Moreover, the geometry of the aluminum profile has been reinforced by increasing its thickness. This improves the performance of the linear encoder within a wide range of vibrational frequencies generated during the machining process. This feature has also been added to the G3 series, meaning that the increased thickness of the profile can withstand vibrations of up to 300 m/s2, compared to 200 m/s2 of the previous series.

Both series include innovations to the protection lips. Geometric optimizations have been made to allow for changes to the section of the profiles, however, the most important innovation consists in the use of a fluoropolymer that is highly resistant to the corrosion and wear of hydrocarbons and other chemical agents used by machine tools during the manufacturing processes.

EMO Hannover, which will be held between September 16 and 21, is considered one of the most important international trade shows for the machine tools and industrial manufacturing sector. The last event in 2017 attracted more than 2,200 companies and over 130,000 visitors, of which more than half were foreigners.