› News › We make your imagination fly

We make your imagination fly

The company SIDE-UP located in southern France and specialized in designing equipment and systems for stage shows has been in charge of creating the most incredible animations on the new Peter Pan show; a Music Hall production that have made adaptations of Les Miserables, Romeo and Juliette, Dracula and Amadeus among others. 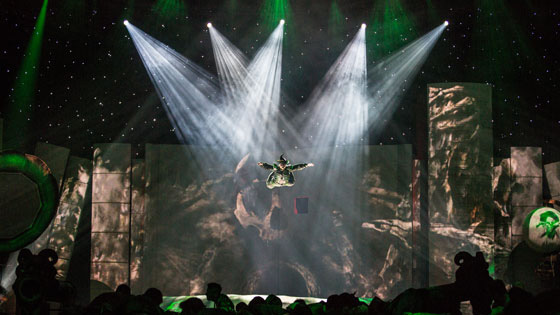 SIDE-UP describes the show as “unique and magnificent, a theater version with the latest technology, an amazing creation, attractive and animated. A balanced mix of show, visual effects and music, for a panoramic production that plunges the audience in a magic world”.

The most important elements of this show are the acrobatics, since Peter Pan flies throughout the show alone or on a ship sometimes at amazing speed.

To make the audience vibrate with Peter Pan’s acrobatics, SIDE-UP, in cooperation with IDMI (Fagor Automation’s authorized integrator), has carried out the integration of parallel cables handled by a FAGOR CNC 8070.

Since this project had little to do with the usual machine-tool applications, the setup was also out of the ordinary. A special kinematics was created to simultaneously manage the whole cable system in order to maintain the balance of the actors and structures moving around in the show.

The CNC controls 4 motors in charge of rolling and unrolling the cables attached to Peter Pan. Thanks to the Fagor CNC system, the position and movements of the main actor are absolutely precise and controlled ensuring total safety during the whole performance.

The cables reaching the stage can be near 100 meters long and there are very few theaters in Europe large enough for this show.

The show, premiered in Belgium in December 2012, will continue its journey through the following European cities; Netherlands (October 2013), Great Britain (Christmas 2013), Germany, France and Switzerland (dates not set yet).