Fagor Automation releases the new Series 3 absolute linear encoders. The ongoing process of developments has been due to the experience gained from the Series 2 and other new innovative features have also been implemented. These improvements and innovations have had an impact on all the technologies incorporated in an encoder, in terms of its mechanics, optoelectronics and software. 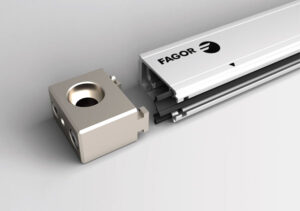 From a mechanical perspective, attention is immediately drawn to the S3 series, which can be installed inside reduced spaces. The threaded head option has been kept for the various mounting options without the need to use nuts. Also at the small-sized G3 series reader head outlet direction can be chosen without having to manipulate the head.

Modifications have also been made to both the endcaps reinforcing various parts in order to improve the response to different frequency vibrations. Given in G3 model, other sections of the extrusion have also been reinforced, such as the profile-to-machine fastening area, achieving a vibration resistance of 300 m/s2 in a wide range of frequencies. Also, exclusive protective lips for these new families are standard additions on all models. Geometric optimizations have been made to allow for changes to the section of the profiles, although the main innovation consists in the use of a fluoropolymer that is highly resistant to hydrocarbons and other chemical agents commonly used for machine tools. 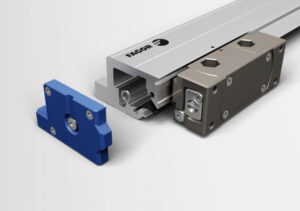 Also, the G3 fastening system visually stands out, where the TDMS TM system has been replaced with a specific flexible machining process in a longitudinal direction which also helps to improve its response to vibrations.

Improvements have also been made to the optoelectronic sub-assemblies essential for encoder performance in hostile working environments. This environmental phenomenon can be produced under normal circumstances, although it is more likely to occur inside the encoder during periods of inactivity. Results have shown that this new technology exceeds the expected anti-condensation and anti-vapor capabilities, by minimizing their effects and achieving optimal encoder performance and operation.

For both families, there is a broad range of available connectivity with multiple drive and control systems (the largest in the market), which has recently incorporated new digital communication protocols as standard features.